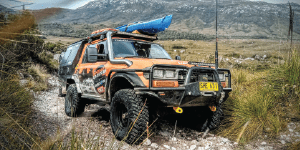 A new set of Maxxis RAZRs fitted to an 80 Series Landcruiser have been given what’s been described as a “baptism of fire” for the first whirlwind 5,000km of Channel 10’s latest Off Road Adventure Tour – coming out the other side, rearing and ready to clock up many thousands more!

In a review of his RAZRs after two months’ straight of filming for the new season, show host-and-outdoor expert Borgy couldn’t say enough good things about his experience with his Maxxis tyres.

Here’s a bit of how he
described the long-suffering tyres which he admitted have been been absolutely tortured on the tour around
one of the toughest off-road destinations in Australia – the wild West Coast of
Tasmania:

“How have they performed? Well, let’s just say
that we’ve been in low range for nearly two months straight and
traction has not been an issue.

Yep, they’ve been aired down to between 16 and 22 psi most days, then aired back up to highway pressures when required. They’ve constantly dealt with mud, sand and sharp granite rocks, and they’ve taken it all in their stride. They’re wearing quite well so far, and we haven’t had a single puncture or sustained any damage outside of normal wear.

One thing’s for sure, if this is a sign of things
to come, I’m looking forward to clocking up a hell of a lot more km’s on the
Maxxis RAZRs!”

If you’re keen to hear more of Borgy’s experience
with the RAZRs on his recent trip, they’ll be featured in a two-part product
review for the Camper Trailer Lifestyle online magazine – and we’ll be
sharing a lot of his content with you on the Maxxis news site!

Plus, don’t forget to keep watching the Off Road Adventure Show on Channel 10 for more exciting times with Maxxis over the coming weeks.

Borgy can also be followed on social media, on Facebook at @mborg4wdaction, and on Instagram at borgys_gone_bush_4wd